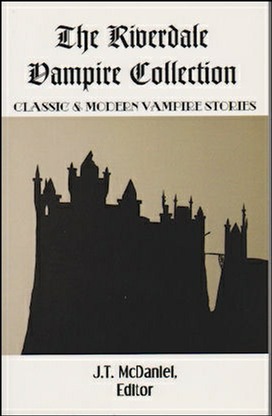 The Riverdale Vampire Collection brings together a diverse assortment of vampire tales, ranging from the classics of 19th century horror to the present day. Editor J.T. McDaniel, perhaps best known as the author of World War II submarine novels (Bacalao, With Honour in Battle), notes in the Introduction that “I have loved vampires—fictional ones, at least—ever since I was a kid sitting up after the news on Friday nights watching Ghoulardi mercilessly razz the collection of el-cheapo horror movies that he ran in that time slot.” In addition to the Introduction and footnotes, McDaniel wrote the final story in the collection, “Memoir,” specifically for this book.

The classic stories include what is generally considered the oldest of popular vampire stories, John Polidori’s “The Vampyre,” the germ of which was generated at the same Swiss lakeside gathering that resulted in Mary Shelly’s Frankenstein. Also included is J. Sheridan LeFanu’s classic lesbian vampire novella, Carmilla, and Honoré de Balzac’s The Succubus, which is a rather odd tale indeed.

Rounding out the collection, the modern stories consist of three contributions by Jacob Thomson, “Predator,” examining an encounter with a serial killer on the streets of a large American city; “Castle Grosshelm,” wherein German prisoners of war, forced into slave labor by their Soviet captors, make an unexpected discovery while digging for treasure in the ruins of a Romanian castle; and two chapters excerpted from Thomson’s acclaimed 2001 vampire/police procedural/erotic novel, The Alukam.

Order at your favorite local bookseller, or from one of these online retailers: