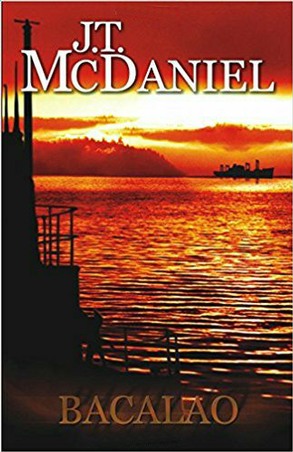 “Bacalao is an impressive and exciting novel of undersea warfare that follows an American attack sub from the moment its keel is laid and on into the deep, blue Pacific Ocean to do battle against the Japanese Empire. Her commander and crew are men we come to respect, even worry over. The Bacalao also becomes one of those individuals, a steel spirit with a great heart and persevering soul. J.T. McDaniel, an authority on World War II submarines, is a terrific writer who has created a classic of wartime adventure. Heartily recommend.”
Homer Hickam, author of Rocket Boys, The Keeper’s Son.

“J.T. McDaniel takes the helm with the steady hand of a master at the top of his game, creating an accurate and fascinating depiction of daily life aboard a diesel attack submarine in the 1940s. From the builder’s yard in Connecticut, to white-knuckle combat in the Pacific Theater, to the heart pounding thunder of exploding depth charges, every detail rings with authenticity. McDaniel writes with the technical precision of Tom Clancy, the pacing of Michael DiMercurio, and the human comprehension of Edward L. Beach. A reader simply cannot ask for more.”
Jeff Edwards, author, Sea of Shadows, The Seventh Angel, Sword of Shiva.

In his most popular novel, J.T. McDaniel takes the reader aboard an American Gato class submarine as she fights her way through the Pacific. Beginning in early 1941, Bacalao tells the story of Lieutenant Lawrence Miller, who first joins the uncompleted boat as fourth officer at the Electric Boat Company yard in Groton, Connecticut.

Present during the attack on Pearl Harbor, Bacalao is soon sent into action against the Japanese, with decidedly mixed results. In the opening months of the war, the American submarine force was plagued by torpedo problems. These were exacerbated by an adamant refusal of those in authority to admit that there was a problem. The carefully-honed procedures developed before the war were often ineffective in the face of a determined enemy. There were failures in planning. Frustration abounded, and the Japanese quickly proved to be anything but the primitive copycats of popular image.

Nor is Bacalao herself immune to problems. There are surprising changes when some prove unable to adjust to the sudden stress of battle. Equipment that showed great promise in pre-war tests doesn’t always work, and the “advanced” engines that promised to be such a great improvement quickly prove an unmitigated disaster.

There are constants. Miller is a strong presence, advancing steadily as the war drags on. And there is Bacalao herself, as much a character as any of the men who fill her hull.

Bacalao may be ordered from your local bookseller, or from these online retailers: