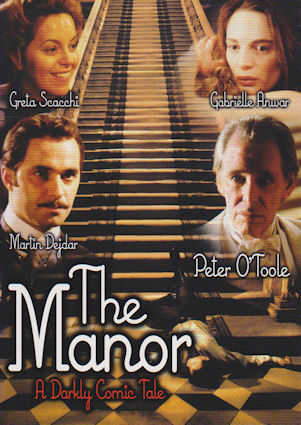 The plot is relatively simple. A Scotland Yard detective is summoned to Ravenscroft Manor to investigate the death of the footman, who died taking a tumble down the main staircase in the creepy old house. The governess has admitted shoving him away as he attacked her, causing the fall. It sounds simple enough, but none of the stories match. Was it an accident or a murder? And it seems this was the second similar death. The master of the house fell down the same steps three months earlier. Just to add to the suspicion, the governess seems deliberately obscure, the mistress of the house can’t get her story straight, the 17-year-old daughter keeps shifting from confused and innocent to blatantly seductive, and the maid appears to be generally flustered, terrified, and slightly less intelligent than the aspidistra in the corner. The housekeeper is just creepy.

Adapted from Don Nigro’s two act dark comedy Ravenscroft, The Manor is a 1999 Czech production starring Martin Dejdar (pronounced Mar-teen Deh-yahr) in his first un-dubbed English speaking role. Dejdar also co-produced, which may explain a lot. He’s a popular actor in the Czech Republic, and also provides the Czech voice for Bart Simpson. English is clearly not his first language.

Film directors and writers always feel the need to “open out” a play when adapting it, and this is no exception. Several characters are added, including the local doctor, who is only spoken of in the play. Peter O’Toole, who manages to steal every scene he’s in, is another added character. He plays the late Mr. Ravenscroft, dead for three months, and only spoken of in the play, but here appearing in several flashbacks. Also present in flashbacks is the dead footman, Patrick Roarke (Mark Huntley), who gets to die repeatedly, in slightly different ways, as the film progresses from one witness to another. The camera also seems to spend an inordinate amount of time tightly focused on his arms and chest as he lifts weights, particularly when Mrs. Ravenscroft is discussing how “fit” he was. Yes, we get the connection, and enough already.

In his notes on the play, Don Nigro said he thought about having these two on stage, but found things worked better once they were relegated to dialogue references. Possibly director Ken Berris and co-screenwriter Steven Moses should have paid more attention to that insight, though O’Toole’s drunken Welsh monologue did add a degree of animation that was mostly lacking in the rest of the film.

Casting Dejdar as Inspector Tomas Hatcher (John Ruffing in the play), created certain issues. When I did the play, I played Ruffing with a slightly posh assumed accent that briefly reverted to Cockney after he’s hit over the head with a vase. His father is a clockmaker, but Ruffing has managed to rise to Inspector and it wouldn’t be that odd if he’d had a few elocution lessons. Dejdar has a strong Czech accent, and this is explained by turning him into the son of a diplomat, and having him raised in Bohemia. Hatcher does share one major quality with Ruffing, though. They both drink far too much.

The governess (Gabrielle Anwar) also gets renamed, for who knows what reason. Originally Marcy Kleiner, she is transformed into Charlotte Kleiner. The movie also has her meeting Mr. Ravenscroft in Vienna, thus screwing up one of her best retorts to the Inspector, who thinks he’s found a strong motive for her to murder the footman, and was wondering if Mr. Ravenscroft’s reason for hiring her wasn’t at least somewhat carnal in nature. She did have an illegitimate daughter, after all. (Personally, I’ve always suspected that if Mr. Ravenscroft was fooling around with anyone, it was probably the housekeeper, who’s been in the household since she was a teenaged housemaid, and had know him considerably longer than his wife.)

Ravenscroft is a dialogue-heavy play. The Inspector appears in every scene in the play, and gets about 49% of the lines (believe me, I counted them; Hamlet has fewer lines). The adapters cut remarkably few of them. They have the cameras following people around the house, while the play never leaves the library, but everyone still talks a lot. Too much for a movie, really. Dejdar’s accent keeps getting in the way as well. And he’s a sloppy drunk, which I don’t think the part really calls for. Drunk, yes, perhaps verging on alcoholic, but probably more outwardly in control than he really is. When I played the part I based his behavior on an old friend from New York, who was generally drunk any time he was awake, but without it being all that obvious most of the time.

I don’t find it a problem that the Inspector has a hard time sorting things out. No one is making it easy. But I do think it would have been a better film with a British actor in the part. What you wanted wasn’t Dejdar, really, but Rowan Atkinson, or at least someone with an equally arch delivery.

I’ll admit I enjoyed the film, in a low keyed sort of way, but I’ve been in the play, and half the fun was wondering what they were going to change (not much, really).

I’m not going to give away the ending. Let me just say that both the play and the movie might have better been titled Red Herring. A friend of mine suggested the best way to enjoy it was to forget about trying to figure out who did it and just enjoy the comedy.