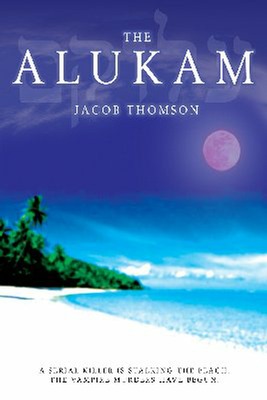 “This is an unusual book, part mystery, part horror and very sexy. A sort of Rabbi Small meets Dracula at the 87th Precinct, with the story told in the Penthouse Forum.”
John Miller

“This is an excellent police procedural novel that pits a police detective, who also happens to be an Orthodox Jew, against a cunning centuries-old serial killer.”
Linda Suzane

Mr. Miller sums it up nicely. This unique novel combines the police procedural’s matter-of-fact chronicling of events with a supernatural murderer. Or is he a murderer? After all, a vampire doesn’t kill because he gets some sort of kick from the act. He does it to survive.

Admittedly, this hasn’t been a huge seller, perhaps because it does cross so many genre lines. Is it a police procedural? Is it horror? Is it erotica? Is it a religious-themed novel? Arguably, it’s a little of all of these.

Port Morrow, Florida Detective Sergeant David Schneider is a sharp, efficient cop who also happens to be an Orthodox Jew. A widower, with a high-school-aged daughter, he somehow manages to do his job and remain observant. But this case, with bikini-clad corpses starting to turn up on Port Morrow Beach drained of blood, is taking its toll. The county commission is coming down hard on the Sheriff, as the presence of a serial killer isn’t exactly good for the tourist business, and that means the Sheriff is coming down hard on Schneider.

What no one knows is that, this time, they’re not faced with a nut who thinks he’s a vampire. They’re faced with an actual, 300-year-old blood sucker. Two of them, once his girlfriend arrives for a visit.

Nor are these ordinary vampires. Isaac Nathanson is Schneider’s multi-great-granduncle, and the two strongly resemble each other. Being a Jewish vampire, he has different rules. Sunlight has no effect on him. He isn’t bothered in the least by Christian religious symbols, and the Jewish ones don’t present much of a problem, either. Even driving a stake through his heart would be only a temporary inconvenience. He rests in his coffin only on the Jewish Sabbath, when he’s given a glimpse of what he’s missing out on because of his 1684 suicide.

There’s also a lot of sex. No dirty language, mind you, but lots of sex.

And, just in case anyone was wondering, a pseudonym was used for the initial release of this book simply because it was so wildly different from the military adventure stories I was mostly known for at the time.