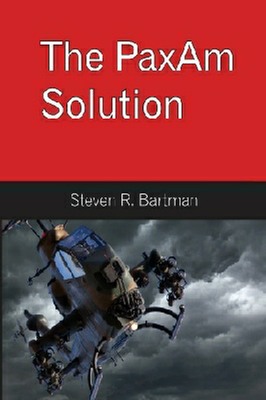 The PaxAm Solution is a big book, and in the trade paperback edition, an expensive one. (A new paperback edition has been issued since this was written, reducing the price from $24.95 to $16.95.) A lot of potential readers, confronted by this, are going to ask, “Is it worth paying that much for a novel by an author I’ve never heard of?”

The unequivocal answer is, “Yes, it is.” Bartman is essentially unknown, but he’s also a damned good techno-thriller writer. As big as the book is, it never drags. The last 200 or so pages make up an extended battle scene, and it’s best to start reading that section when you know you’ll have time to finish it in one sitting. It’s that hard to put down.

The story begins with a single terrorist successfully sneaking into the American ambassador’s office in an unnamed African city and setting a bomb. The “terrorist” turns out to be USMC Colonel Dwight Renfro, and the “bomb” does no damage beyond stinking up the office and thoroughly embarrassing the embassy’s Marine security detail. It’s a security test, not an actual attack, and if the Marines don’t do very well, that’s the whole point of the exercise.

Renfro is a trouble shooter for the Commandant of the U.S. Marine Corps, but retirement is impending. Then, after getting a flat tire in Washington, DC, Renfro’s wife is raped and murdered, and Renfro himself seriously injured by some small time crooks. Ultimately, this will set the stage for his post retirement job.

In this fictional world, Fort Bragg, NC has become the victim of government cost cutting. At the instigation of North Carolina Senator Brewster Teel, and with the help of an amendment to the Constitution that removes all rights of convicted prisoners fitting a certain profile, the old Army base in transformed into a high tech prison. Most of the defenses are automated; there are no guards in the interior, just hundreds of prisoners dumped into barracks and left to fend for themselves, kept inside the perimeter fence by the deadly machines. Renfro supervises the construction of the defenses for this giant prison, and becomes its security head.

The catalyst of the story is a German arms dealer, Gunter Zeiss, who becomes one of PaxAm’s first inmates. A born leader, he quickly organizes the convicts along what can only be viewed as Nazi lines, with Zeiss as Führer. Since the prison administration mostly stays out of the interior, Zeiss gets away with it. His henchmen, recruited from the toughest of the hoods, collect all the food and use it to control the others. Still, being dictator of a pack of convicts isn’t enough for Zeiss, who is used to power in the outside world. He is immensely rich, and has a fanatical group of followers on the outside whose only goal becomes getting him out.

PaxAm prisoners, tattooed with the word “Federal Prisoner” and their prison ID number on their foreheads, can normally expect to be released only by death. Their rights completely stripped away, they can be shot on sight if they somehow manage to get past the automated perimeter defense. And a Marine detachment stands ready to step in should there be any trouble. Marines are not noted for their forbearance and, should they have to go in, their orders are essentially to drive the prisoners back to their barracks and kill anyone who doesn’t obey.

Zeiss, with millions of dollars at his disposal, will ultimately start a prisoner rebellion during the height of a hurricane, using his own outside men to neutralize the prison’s defenses. The battle for the prison, which takes up nearly 200 pages of non-stop action, is one of the most compelling accounts of sustained combat ever written.

Bartman has produced one of the finest techno-thrillers in recent years.