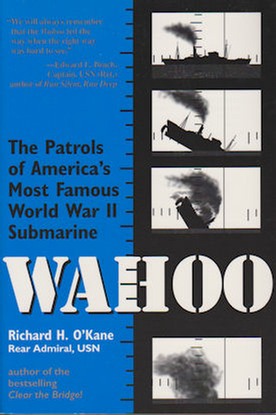 Dick O’Kane was at sea when the United States entered World War II following the Japanese attack on Pearl Harbor. At the time he was serving as third in command of the USS Argonaut (SM-1), the only purpose built minelayer submarine in the American fleet. Argonaut, which was off Midway, immediately commenced her first war patrol. O’Kane was clearly fond of the giant sub, but his writing also makes it very clear that he was aware of her deficiencies. She was slow to dive, maneuvered poorly, and could dive safely no deeper than 250 feet. Argonaut was huge—she would be the largest American submarine ever built until the advent of the fleet ballistic missile subs—with her huge bulk in large part the result of her intended mission. Mines are big, and take up a lot of room.

Argonaut never managed to get into position to attack what was, at the time, thought to be a Japanese invasion force heading for Midway (actually a pair of destroyers and not an invasion, which was just as well, considering that Argonaut, whose crew was somewhat busy just keeping the boat from falling apart, was the only American fleet unit in a position to do anything). (O’Kane gives a much more detailed account of his time in Argonaut in his autobiography, Clear the  Bridge.)

When Argonaut returned to Pearl Harbor, her XO was sent ashore to a staff job, O’Kane stepped up to XO, and her commanding officer, Stephen C. Barchett, who was due for rotation after three years in command, took the giant  submarine back to Mare Island for a complete refit.

It was at Mare Island that O’Kane left Argonaut, reassigned to the then under construction USS Wahoo as executive officer. He would hold that job during Wahoo’s first five war patrols.

Wahoo would become one of the two or three best known American submarines of World War II. O’Kane writes that, at first, this didn’t seem likely to be the case. Wahoo’s first commanding officer, Marvin Kennedy, comes across as perhaps a little too much of what we would now call a micro-manager. He was also, possibly, a bit too much by-the-book, where it would soon be recognized that submarines accomplished more with commanders who were more willing to take risks and go with their instincts. One result was that O’Kane found himself looking over the officer of the deck’s (OOD) shoulder far more than he really needed to, at his captain insistence, while rarely getting sufficient rest himself. Kennedy also tended to ignore his XO’s advice. This is a captain’s prerogative, but O’Kane clearly felt he would have been better off listening, and that opportunities were missed.

Kennedy, it should be noted, recognized his own limitations, and was apparently as surprised as anyone when he found himself still in command on Wahoo’s second war patrol. This time they had a passenger, Dudley W. “Mush” Morton, who was riding along on a PCO (Prospective Commanding Officer) cruise. Morton was there to observe, and to get used to the day-to-day and combat operations of a fleet type submarine, after which he would receive his own command.

That command turned out to be Wahoo. Morton took command for her third war patrol, and would continue to command her for the rest of Wahoo’s career. Morton, according to O’Kane, was a completely different type of commanding officer than Kennedy. While Kennedy tended to caution and was very likely overly concerned with the possibility of being detected, Morton was aggressive almost to the point of recklessness. He figured the job of a submarine was to sink enemy shipping, and that job entailed the possibility of being detected and attacked.

He also had some very unorthodox ideas about attacks. He wanted O’Kane, his XO, to make all the periscope observations. Morton would then be free to concentrate on the overall tactical situation. It was a system that worked very well indeed for these two men. Morton knew tactics, and he certainly knew how to find enemy shipping. O’Kane, who would go on to become America’s top scoring submarine commander, was an outstanding shot.

Morton and O’Kane worked very well together. Then, following Wahoo’s fifth war patrol, O’Kane took command of the brand-new Tang, and Wahoo, following an overhaul, returned to action. Her sixth war patrol produced no results. Morton complained of poor torpedo performance. Patrol report endorsements faulted Morton for firing single shots instead of spreads, a complaint O’Kane strongly disagreed with. If the torpedoes had hit, he argued, they should have blown up, and he had little doubt that they would have hit. But the magnetic exploders had been deactivated before that patrol and, with the benefit of hindsight, O’Kane suggested that the magnetic exploders, while very unreliable and prone to premature detonation, had still probably been responsible for most of the previous sinkings. It would be a while longer before the problems with the contact exploders were also sorted out.

O’Kane used the patrol report to write up his account of Wahoo’s sixth war patrol. For the seventh, he was forced to speculate, basing his guesses on his knowledge of Morton’s tactics, and reports of Japanese shipping losses in the Sea of Japan during the patrol period.

In Wahoo, O’Kane presents us with a first-hand account, written with a clear flair for narrative and an obvious affection for both the submarine and the men who served in her. Wahoo is one of those books that belongs in every submarine library.