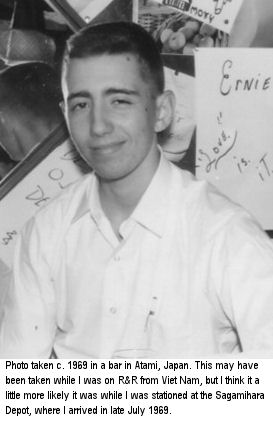 J.T. McDaniel was born on 12 March 1949, at the Bedford Municipal Hospital, becoming the first-born of Thomas McDaniel (1917-1992) and Irma (Ames) McDaniel (1925-2018). On the same day, Edward Albee turned 21, Liza Minelli was three, James Taylor was one, and Mitt Romney was just turning two. “A nice, show-businessy day to be born,” he once said, “if you ignore the annoying politician.”

During McDaniel’s childhood, his parents resided at 22465 Broadway, in Oakwood Village, Ohio. The house no longer exists, the entire neighbourhood having been torn down during the construction of the I-480/I-271/Forbes Road interchange in 1964.

His father was a millwright at Republic Steel in Cleveland. Raised on a farm, the elder McDaniel was a World War II veteran. He served with the 37th Infantry Division, Ohio National Guard, seeing action in New Georgia, Bougainville, and the Philippines. A truck driver before (and during) the war, he went to work for Republic Steel after his discharge in 1946.

Thomas McDaniel married Irma Ames on 6 December 1947, in Garrettsville, Ohio, at first moving into a small apartment in the then rather bohemian Hough area of Cleveland. They lived there only a short time before buying a little two-bedroom bungalow on Broadway, in Oakwood Village, in 1948.

His mother had worked as a beautician before she married. As many people did in those days, she kept her licence active long after she quite doing that sort of work, only finally letting it lapse when she was already in her 70s. She served two terms as Village Clerk, running as a Republican. She stayed home while McDaniel and his two siblings, Roger (1950-) and Debra (1953-1997) were young, then went to work for the Bedford City School System, from which she would retire.

“I think I had a fairly typical childhood for the period,” McDaniel says. “It wasn’t exactly Ozzie and Harriet, or Leave it to Beaver, but it did include fishing, wandering through the woods, epic battles with wooden swords and the normal collection of cap guns, and walking to school in the days before it ever occurred to anyone that grade school kids should have to do homework, or that there was any particular danger in letting kids walk to school. (There still isn’t, really, other than traffic, but since the rare incidents tend to make national news now people tend to think it’s a lot worse.)”

Summers were partly spent in Garrettsville, where his mother’s sister and her husband, Richard and Marie Rodhe, owned a small farm. McDaniel would later remember them as being “about as close to grandparents as I had.” His actual grandparents had all died between 1920 and 1933. His Aunt Marie raised his mother, her younger sister, after their mother died.

Curiously, while Tom and Irma met in Ohio, both of their families were from Macon County (Decatur) Illinois. Tom’s parents had moved to Freedom, Ohio when he was still an infant. Irma moved there when she was eight, after her mother’s death. A large number of relatives on both sides still live in Decatur. Tom met Irma, who was eight years his junior, when he briefly worked for Richard Rodhe as, according to Rodhe, “the worst tractor driver who ever plowed a crooked furrow.”

The Rodhe’s small farm was mainly planted in potatoes, which were mostly sold for potato chips. They also raised strawberries, some wheat and oats, and generally had at least a hundred chickens producing eggs. In the spring, the numerous maple trees in the wooded section of the farm were tapped and the sap boiled down for maple syrup. When McDaniel was young, the Rodhes kept a few dairy cows, always Jerseys or Guernseys, and generally one of two Hereford steers. The cows gave milk, and the steers would eventually become dinner. All of the cattle were sold off when Ohio health laws were changed to require refrigerated milk storage tanks, effectively putting the small farmers who produced only a couple cans a day out of the dairy business.

At five, McDaniel started kindergarten at Interstate School. At the time, kindergarten was still just a half-day class, concentrated primarily on socialization. Reading wasn’t taught until first grade. In 1955, when he was entering first grade, he was transferred to Carylwood Elementary School, which was close enough to walk and had just opened that year. He remained at Carylwood through the sixth grade, under the system prevailing at the time, in which students were assigned to a school based on proximity. Carylwood was thoroughly integrated, while some other elementary schools were essentially all white. Any de facto segregation in the system ended in 7th grade, since the district had only a single junior high and high school.

His education continued with three years at Moody Junior High School, and three years at Bedford Senior High School, from which he was graduated in 1967. Moody has since been torn down, with the site now occupied by the Bedford Library. The high school is still in operation. During his last year of high school, McDaniel was head photographer for the yearbook. He did manage to appear, in a two-line part, in the school’s production of Annie Get Your Gun, the Irving Berlin musical, but presented as a straight play for some reason.

McDaniel enlisted in the Army after high school. He took Basic Training at Fort Knox, Kentucky, and advanced training at the Defense Information School, then located at Fort Benjamin Harrison, Indiana, but since relocated to Fort George G Meade, Maryland. This was a Department of Defense school, so the classes included Navy, Marine, and Air Force personnel, in addition to Army. He graduated in April 1968 and, after a month of leave, was shipped off to Viet Nam, where he was assigned to the 308th Combat Aviation Battalion. This was part of the 16th Combat Aviation Group, attached to the 101st Airborne Division at Camp Eagle, near Phu Bai. He remained with the 308th just long enough to qualify for the 1st Aviation combat patch. The unit was then transferred to the 101st Airborne, becoming the 159th Assault Support Helicopter Battalion. This left McDaniel, along with a large number of other unit members, among the relatively rare group of veterans who qualified to wear two different combat unit patches during a single tour.

At the time of the transition, McDaniel’s Public Information NCO slot was dropped at battalion level, so he was transferred to the newly-created 160th Combat Aviation Group, also located at Camp Eagle. After a year in Viet Nam, he was transferred to Japan, where he served out the rest of his service.

“I’d been writing stuff all this time, as well as doing a little acting,” he says. “At DINFOS I did All My Sons, running the show as stage manager. They had a really nice auditorium with a well-equipped stage at Harrison. I think it’s part of a community college now. I’m not sure what they have at Meade, but pictures of graduations and other ceremonies suggest they’re not as well set up there.”

One of his first jobs after the Army was as Assistant Editor of the Bedford Times-Register. This was really a general reporting job, with only a little editing. He remembers attending city council meetings, and the weekly letters from Jesus, “who apparently lived in Bedford.”

McDaniel has been married twice, and has three grown children. He still writes, obviously, and continues to act on stage, and in commercials and films. He retired from Verizon in 2015, and has concentrated on writing and voice acting since that time.

His credits include the role of the Doctor in Ben Brown’s feature, After, and the ponderously-pedantic Mr Slumphy in The Wicked Imagination of a Teenage Kid,  nineteen audiobooks, and numerous stage credits, including Jonathan in Arsenic and Old Lace, Doc in West Side Story, Jimmer in Escanaba in da Moonlight, the Duke in A Comedy of Errors, Claudius in Hamlet, Mayhew in The Witness for the Prosecution, Captain Southard in The Caine Mutiny Court Martial, Sir Willoughby Drake in It Runs in the Family, DI Ruffing in Ravenscroft, the Narrator in Into the Woods, and many others.