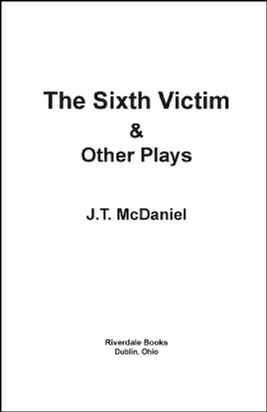 The Sixth Victim & Other Plays

This collection of five one-act plays is ideally suited for the producer who wishes to fill out a bill, or simply to present an evening of one-act plays. The plays range from monologue to the semi-classical, and from as few as two actors to a dozen or more. Settings include Victorian London in the time of Jack the Ripper, medieval Denmark, a murderer’s basement, a suburban funeral home, and a middle class house in central Ohio.

The Sixth Victim: A day or two after the last of the canonical Ripper murders, red-headed prostitute Dina brings a man to her Whitechapel bed-sitter. The conversation moves back and forth, sometimes hinting that the Man may be the Ripper, other times not. At one point Dina suggests that she’s not really afraid of dying, and that she even tried to kill herself once by having her head crushed by a goods wagon’s wheel, but it didn’t work. Understandably, the Man doesn’t believe her. Eventually the Man pulls out a knife, revealing himself as the Whitechapel murderer. At this point, Dina easily disarms him, and the play ends with her pushing him back across the bed and leaning over him, her mouth on his throat as the lights go full red before the blackout.

To Kill a King: Written in blank verse, To Kill a King is a prequel to William Shakespeare’s Hamlet. At its simplest, the context is that the Ghost lied about nearly everything except being killed by his brother. King Hamlet didn’t love his wife, though he does seem to have a fairly strong connection with Osric, and there is a slightly better than even chance that Claudius is Hamlet’s actual father, not the king.

Except for a single mistake, early in her marriage, Gertrude has never strayed, despite having been in love with Claudius from the moment she first saw him and realized she was going to be married to “the wrong brother.” She would prefer to be married to her brother-in-law, but both are bound by a strong sense of honor and duty and, while close, are unwilling to take it further.

Then the king sends a hired assassin to kill his wife. Claudius stops the murder, and the next day uses the assassin’s bottle of poison, provided by the king, to kill his brother in the castle garden. Because King Hamlet had figured out that his son was really his brother’s, a secret codicil to his will declared young Hamlet a bastard, making him ineligible for the throne. Claudius becomes king, getting a confidential agreement from the Council that once he’s married to Gertrude, Hamlet will be quietly legitimized and thus be able to follow his step-father, who is also his real father, to the throne. In the interest of saving Hamlet and Gertrude from the shame of the truth, Claudius swears the council to secrecy and the impossibility of notifying Hamlet and getting him back to Elsinore in anything under a month is used as the reason for Claudius’ coronation. A kindness that will, of course, backfire tragically in Shakespeare’s play. The play ends with the wedding reception scene from Hamlet and Claudius’ first few words to the court.

Burying Dad: Joe and Mary are siblings, Joe in his mid-60s, Mary a couple years younger. Joe is a retired Army general; Mary is a school teacher. On this afternoon they are waiting in a visitation room at the Mortimer Funeral Home for their late father’s friends to come to his funeral. It’s a long wait, and no one seems to be coming. As they converse in front of the flag draped casket, they learn some new things about themselves, and even more about their father. Joe seems to have an uncanny knack for marrying gorgeous strippers who eventually realize they prefer women. Their father was not only senile, but probably some sort of pervert. And he apparently either didn’t have any friends, or managed to outlive all of them. A good play for two older actors.

It’s the Computer’s Fault: Rod lives on a farm and loves computers. Unfortunately, he’s a bit OCD, so when an online personality quiz suggests he’s most like serial killer/cannibal Ed Gein, he’s compelled to kidnap a waitress and take her back to his basement, where he has her tied to a chair and gagged. Because of this, Lucy, the waitress, has no lines in this play, but can only react to what Rod tells her. He spends the whole play talking to her, explaining just why he has to kill her and eat her. It’s not his fault, really, the computer is making him do it. He doesn’t really want to, but computers are how God talks to people, gives them instructions, so he has to. It does not go well for Lucy, and right at the end Rod gets a surprise of his own.

Sunday Afternoon: Dave and Norma have been married for 45 years. Lately, Dave has been forgetting things. Things like whether his oldest son is still alive, or which of his daughter’s three children was born first. This morning Norma sent him to the supermarket, about a quarter mile away, for some zucchini. He came back three hours later with a bag of turnips. He remembers the trip they took to Bavaria 40 years earlier, but can’t help thinking that a Baron Bomburst built one of the castles. Norma isn’t quite sure what to do with him. When their daughter, Judy, comes over to visit, her father is wandering around the house trying to find his pipe. The one he stopped smoking before Judy was born. Later he finds a pipe, a two foot length of iron water pipe, but can’t remember why he wanted it. Is it time for a home? Norma and Judy are debating this. What they decide remains up in the air.