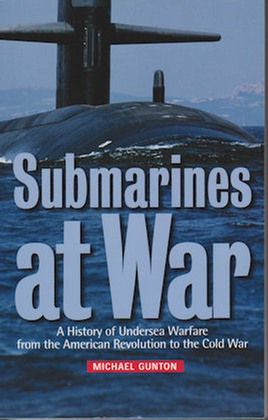 Michael Gunton’s Submarines at War has me a little conflicted. Gunton has written a fairly good, and eminently readable, general history of submarines and submarine warfare. Being British, he tends to concentrate on British submarines, which is fine. He also covers the German boats and captains fairly thoroughly, again understandably, as British operations were predominantly directed against Germany. Gunton served in minesweepers during the war, in the North Sea and Western Approaches, where German subs were the primary threat.

What conflicts me about this book is that, despite a strong research effort and good writing, too many errors creep in. A lot of these seem to result from over-reliance on a computer’s spell checker, or confusion of similarly named ships. At one point U.S.S. Batfish is called U.S.S. Beatific, and American submarine commander Frank Latta becomes Frank Latte. Both of these seem almost certainly to be spell checker artifacts.

Sometimes, though, the goofs just seem careless, as on page 166, where Gunton writes of “…the German battleship Lützow, later renamed Deutschland…” This is a double error, as Lützow was a Panzershiff, commonly referred to as a “pocket battleship,” not a battleship, and Deutschland was her original name. Earlier, he confuses the name of the British battleship Royal Oak, sunk by Prien at in U-47 at Scapa Flow, with that of the aircraft carrier Ark Royal.

I tend to think writing for newspapers is a good background for writing books. Sometimes, though, it can have its drawbacks. This book, while generally well researched, gives the impression of having been written a little too quickly, and not having been adequately edited. You have to write fast when working against a deadline. It’s generally a good idea to work a little slower, and triple check everything, when you’re writing a book.

As I said at the beginning, this is actually a pretty good book. Should the author care to go back, fix the typos and factual errors, and produce a second edition, I’d be very happy to raise my rating.