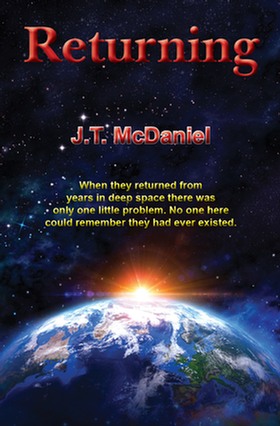 “Returning is part-fantasy, part science techie, part political drama—and great storytelling. It begins with a diverse crew preparing to leave their home planet of Barzak in a very special starship, named Warrior. Most of the action, however, takes place 86,000 years later, when they go home for a visit. Exotic, well-written, and captivating, I didn’t expect to love Returning quite so much. It made me laugh and it made me think. Isn’t that the point of literature?”
Joyce Faulkner, award-winning author of Vala’s Bed, Windshift, In the Shadow of Suribachi, and USERNAME

At 01:47:18, on Tuesday, 2 April 2126, Doctor Carla Tuttle, of the Royal Observatory, Greenwich, England, observed a powerful energy surge beyond Saturn’s orbit. The surge created a flare bright enough to be seen from earth with the naked eye.

Shortly thereafter, a 15-year-old girl, working the 80-meter HAM band in Denver, began to hear strange, unintelligible words, repeated over and over, on what should have been a code-only channel.

Within hours what was happening seemed obvious. A gigantic spacecraft, some 5.2 kilometers in length, and 450 meters in beam, had emerged from nowhere into earth’s solar system. Worldwide, the military went on high alert, as it soon became obvious that, whatever this was, it was heading for earth at an impossible speed and, more significantly, was slowing down.

Read Excerpts and Other News

Excerpt No. 1 (The beginning of the book)
Excerpt No. 2 (Some excitement at the Royal Observatory)
Excerpt No. 3 (Visitor to the Sagan Space Platform)
Excerpt No. 4 (Sara escapes; a very old argument)
Excerpt No. 5 (What happens if you disagree with the government?)
Excerpt No. 6 (Dealing with illegal immigration in 2045)
Characters and Background
Interview with Captain Romiwero

In the United Kingdom, Prime Minister Sir Charles Vickers was understandably nervous. The Russian President was hearing talk of invasion from his military. Captain Charles Sebastian, RN, commander of the Sagan Space Platform, was even more nervous, as the huge alien ship was now parked alongside, with ominously-shaped capsules approaching his command. And, in the United States, the official line was that the whole thing was a British hoax, despite the ship being so big it could be seen from the ground.

Things got even more interesting when the alien ship’s captain, along with two crew members, decided to visit the space platform. With tiny, advanced computers handling the translation, the captain corrected Sebastian’s mistaken impression. The ship was not an alien craft. It was from earth, returning from almost 87,000 years in the past. No, there was no interest in conquering the planet, but the crew would like to come down and visit their home planet before continuing on their explorations. And there were a few open positions, should anyone wish to join the crew.

Only the United States seemed not to notice. So far as President Will Gordon and his government were concerned, no one could have returned from 87,000 years in the past, because everyone knew that the universe was only about 6,000 years old. It was a different United States, one that the religious right had finally been able to bring about, where having an abortion brought the death penalty, blasphemy was punishable by prison, and all Jews had been shipped to Israel (which, annoyingly, still hadn’t brought about the Second Coming). It was a United States where a former television evangelist had been in the White House for 29 years, and atheists were illegal. A United States where a remote section of Wyoming never appeared on aerial imaging sites, and people who spoke out against the established order sometimes seemed to just disappear.

Special thanks go out to Kevin Scott, John Beahan, and Doug Estes. Thanks, too, to everyone who contributed in any way, by responding to Facebook posts and Twitter, sharing, retweeting, and otherwise spreading the word. Thanks, even, to the right wing nuts whose negative responses still served to make more people aware of this book. I don’t really mind if people want to hate on the book, many of whom haven’t actually bothered to read it, because it gets the word to the people who think they’re idiots and will buy the book just to see how dumb the other guy’s reaction was.